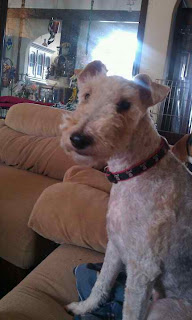 Sam here. Fresh from the groomer's with my new military cut. Everyone has been scolding my mother for having my fur cut during winter. I say that it cuts down on drag when I'm running flyball. I need to be as fast as possible, you know.

In my last installment I told you about the embarrassing story of my mother locking the Supreme Commander and herslf INSIDE the trailer. I had hoped that would be the last we would hear of that escapade.

No, it wasn't. Mother snuck out to a flyball pawty yesterday and brought home this monstrosity. 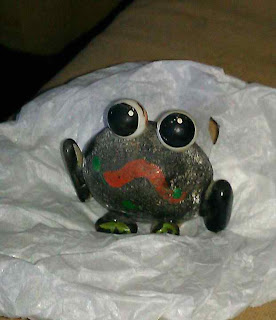 One would think an award would be a shining jewel in one's career. A small memento of a moment in time when everything came together. You are probably asking what is this ugly rock/frog. Pals, this is (an I use the term "award" loosely) is an award for the most idiotic thing of the year. Yes, mother won it for imprisoning both the Supreme Commander and herself in the RV trailer. 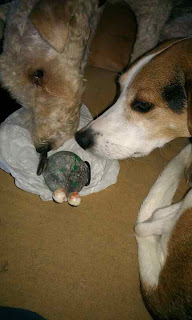 Zorra and I are investigating this very carefully, as you can see. I'm not really happy that mother won this award. It's not necessarily as important as the awards I won this year....

THIS is an award. 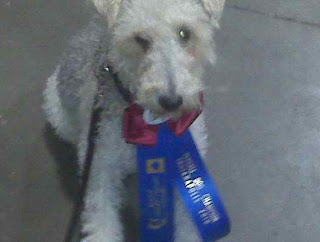 Luckily, she will award it to someone else next year. THANK goodness. My sisters and I will be watching and tabulating and will be happy to get this black mark erased from our record! Seriously, we have a reputation to uphold, even though Mother is taking this award so lightly!
Barked by COL. Sam ASTA-fari Joe H. Pinkerton Peabody, Esq at 9:17 PM 5 comments: