The year in review, according to ME, Sam.

As I take paws to keyboard, I am thinking of all the experiences that my sisters and I have had this year.

This has been a great year of change for all three of us, not to mention Mother. Zorra competed at the CPE Nationals (Agility) in Kissimmee, FL. She took a long trip with Mother and the Supreme Commander through Ohio, Kentucky, Tennessee, Georgia, and Florida to go compete for 3 days. Katherine and I were forced to stay home with Auntie, and we did not have as much fun as Zorra. 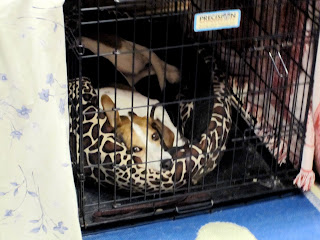 We've all competed in agility trials closer to home. We have all done very well and have had fun. We've all gained a couple titles or so in the past year as we go toward the ultimate goals of the top titles.

Katherine has started a new sport that Mother says is just for her. Hurmph. I am going to try it one of these days when Mother isn't looking. It is called lure coursing and Katherine loves it. She would rather do that then anything else. 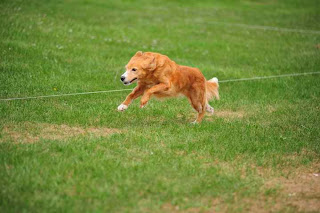 Most of our time and adventures have been gained through Flyball. When we go to flyball tournaments, we tend to go with the Supreme Commander and stay in her RV trailer. It is usually Spirit and Yippee, who are in charge of the Supreme Commander, and all of us. We like traveling with the trailer, as it is:

Mother says that at some point, we may have to sleep in our tent like we used to, but she can stay in that leaky tent. We want to stay in the cushy surroundings!

Although, at times I do wonder about Mother's mental state. Earlier this summer, she managed to lock the Supreme Commander and all of us..... (wait for it) INSIDE the trailer. Yes, you read that right, pals. We were locked inside. At some point when Mother walked inside, she managed to somehow break the door mechanics and we were imprisoned! Luckily, The Supreme Commander got on her cellphone and called our teammates Boogie and her mom, Gloria. They came over right away (ten feet) to release us. It was the worst 10 minutes of my life. Seriously, there's something wrong with my Mother sometimes. It is a good thing that she was with me, and I was able to bring a calmness to the situation.


Of course, now for me. This year I took up the fast and exciting team sport of Flyball. Oh my goodness pals, it is the best thing. I can run as fast as I can, retrieve a tennis ball (which I love to do) and bring it back to the Platoon Sargent. I started in March, and now I am the top Wire Fox Terrier in U-Fly and the #8 in NAFA. I can't tell you how much fun it is, and I wish everyone could play with us.

I've met lots of interesting friends on our SWAT team. They are from Ohio and we don't see them often, but when we do it is a grand time. 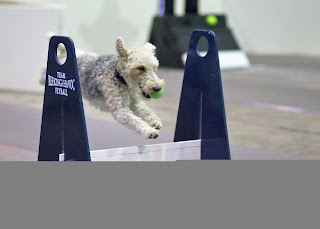 Our own team is Extreme Insanity Flyball team and we have a grand time together. We competed in the NAFA nationals where I received one of my flyball titles this year.

We lost our beloved kitty brother, Harley, who we all still miss terribly. Out of respect, we have given DaKota (our kitty sister) a pass for a while before we start chasing her again.

We're ending this year and beginning the new one at an agility trial with our cousin Cal. Some of our friends are going to be there as well, and we can't wait.

Our brother Harley went to the Rainbow Bridge yesterday.  We sure are going to miss him.  He was ten years old, but had been sickly most of his life.

Mom found him in Auntie's garage when he was a kitten.  He was really thin and Mom thinks he was starving to death, so she hand fed him.  He grew bigger and stronger and played with our other kitty siblings Bob and Sabrina who are both at the Rainbow Bridge now.

About five years ago, Harley caught pneumonia in the middle of the summer and almost died.  In fact, the vet had pretty much resigned himself that Harley was a goner.Our mom, thought not. She took him from the hospital and gave him IVS and hand fed him again until he was better. Everyone at the hospital was amazed that he pulled through and was all better.  They said only our Mom could have saved him.

A few months after that, Harley got out of the house right when a snowstorm hit.  We had 9 inches of snow and we were all worried sick about Harley.  He showed up 9 days later, and you know what?  He was fine.  We figured out he had gotten into a rabbit hole and waited out the storm.  He wasn't dirty or anything!  Just hungry, so he got some food and was soon fine again.

Harley was also the only cat we knew who did the following:

1.  Loved Dale Earnhart, Jr. and would tap on the tv whenever his car was in a race
2.  Never learned to wash his face
3.  Climbed up to the top of the 10 foot window to look out and have alone time.
4.  The only cat in the world I never chased. 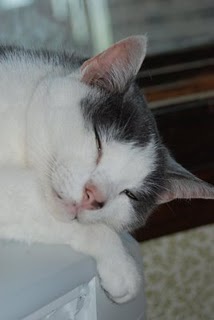 Listen, my pal flyball pal Roux has a new website. He's really big into flyball and also has a huge head. Roux isn't conceited, he's just got a huge head. He's a Staffie, and he is THE MAN for flyball. He's quite a nice bloke, though. This chap has given me some great tips on running on a flyball team, like never give up your tug until you are ready to race. It keeps you focused!

Anyway, if you have time and want to see a new dog on the block, go see Roux as he talks about flyball and his cute friend Cruz and Torhq. Big Head Roux
Barked by COL. Sam ASTA-fari Joe H. Pinkerton Peabody, Esq at 1:45 PM 1 comment:

Email ThisBlogThis!Share to TwitterShare to FacebookShare to Pinterest
Piles pals 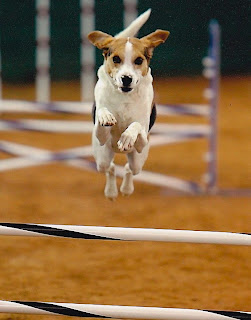 Email ThisBlogThis!Share to TwitterShare to FacebookShare to Pinterest
Piles funnies

Oh, my sisters and I have been so busy going to flyball tournaments and agility practice. We have actually met ourselves coming and going.

I must tell you that I find flyball so very exciting. Of course, everyone who sees me comes up to my mother and and asks about me. I'm quite well known. Some people think I am an Airedale puppy, of all thing! Obviously, they have never met my good friends Maggie and Mitch! 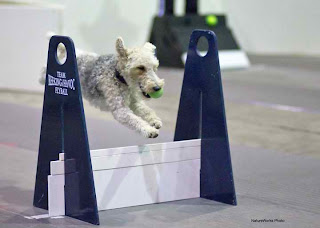 Others marvel at how Mother has been training me to do flyball. They say they've never seen a wire fox terrier doing flyball! How odd, I would think that everyone wants to do it. My mother says that she was naive in the ways of wire fox terrorism and just assumed that I could be trained, or die trying. In reality, I owe little to my mother, and I owe it all to the Supreme Commander. She is the one I take orders from. My mother is merely a platoon Sargent. My mother and I must seek out the Supreme Commander before our flyball runs, which I receive secret orders to carry out during the mission. I guess I can tell you most of the orders of my secret mission, dear friends. Just don't tell my mother. Most of the time, my commander says.. Run as fast as you can, Sam, over all four jumps. Get the ball, bring it back to the Platoon Sargent. I must complete the mission successfully to receive my ration of bits of nicely prepared rare steak. YUM.

In fact, dear WFT pals, our breed is so rare in performance sports that I have won two awards just being me at flyball tournaments. I have received the award for most unusual flyball dog! And, for the dog that loves flyball so much, I run with all my heart. For that one, I won a HUGE gift basket, which unfortunately I had to share with my sisters and cousins.

I have managed to become the #1 wire fox terror in U-fli and I am currently #10 in Nafa. I'm doing this for all the WFTs that have received a bad rap for not being trainable in sports! HURRUMPH is what I say. I have just had more chances to try things than other pups. I want you all to be proud of our accomplishments as I do it for one and all.