Mom has been super busy with work since before Christmas, and well... that is not great. She hasn't paid a lot of attention to us lately, and hasn't let us blog or nothing. So, as they say... idle paws are the devil's workshop.

So, what happened when mom let us play outside for the afternoon, unattended in the backyard? Sam decided to become a mudpie baker. We had a lot of fun playing mudpie baker. But, Sam REALLY had fun.

It started to get dark, and Mom called for us to come in. I guess Sam forgot to wash up like the rest of us before Mom saw him..........

Here he is trying to explain what transpired over the afternoon. 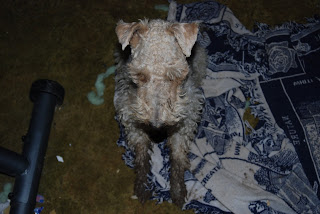 Mom was really not happy, especially since Sam has WHITE fur on his legs. You know, I tried to step in and say that Joe Stains is the king of a certain KIND of stains, but surly Sam is at least the crown prince of mud stains. 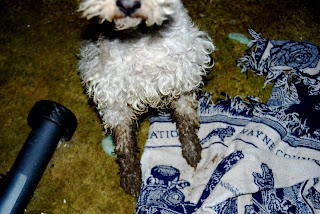 Yea, here he is.... trying to look like a good boy that just got his with mud. Nothing of HIS doing, of course. 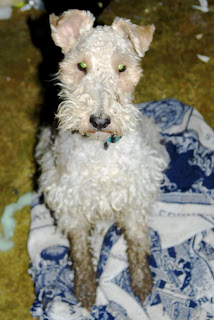 When Mom saw HOW muddy he was, she about fainted. He had it caked all over. He had big, fat droplets of mud on him. Auntie could barely lift him up because he was so mud caked!
I told Mom that we should just get a sand blaster for him. She didn't think that was too funny. Obviously, no sense of humor! 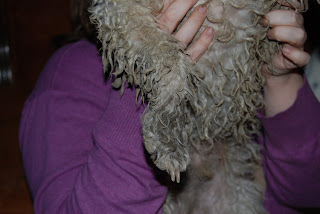 So, off Sam and Mom went. There was splashing, yelling, yelping, strange sounds from the bath. I guess there was some really hard scrubbing going on.

But, when they emerged, Sam was back to normal. Here is is at the agility trial a day later. 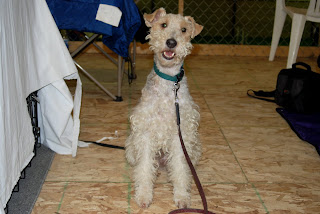 We'll write about the agility trial with our next post!
Barked by Katie at 10:35 PM

Sam you kinda look like me matie. I've been digging in my yard then going into the pond then digging some more. All in all I've been filthy lately.

Keep up the good work.

Mommies have no sense of appreciation for mudpie baking! Good luck at the trial.

Hmmm, now that could probably be the one, single,solitary advantage to 4 feet of snow. No Mud Anywhere!

The Black and Tans. said...

wags from the whippets

omdog, was he mixing cement?! I have never seen anything like that before lol!!

Well I think Sam desewves special awawds and mention on Joe's blog!
That is pawsome mudpie making!
I hope you had fun Sam while it lasted..I've twied to find mud, but can't awound hewe..makes me sad
smoochie kisses
ASTA

The bath sure worth it after all the fun he had playing in the mudd!
I loved his muddy pictures!
Have fun
Kisses and hugs
Lorenza

Wow! I've never seen a dog that was as good at being a mudpie baker as Sam. Too bad the price for his talent is time in the bath.

I haven’t been blogging fow awhile, but Mum has finally stawted updating my blog!
Thanks fow signing my guest book awhile back.
I hope you’ll come back and visit!

Thank goodness you clean up well, Sam! You were one grimy pup! ewwwwwwwwwwwww

Love ya lots,
Maggie and Mitch

I tell ya....there is just somethin' about mud that makes ya want ta get right in it and spread it all around.....it's just incidental that it gets all over ya when ya do that....can't blame the mudpie....blame the mud...

I don't seem to be able to find any of that mud stuff in the city, maybe just as well.

Sam cleans up nicely though.

We hardly knew ya'.

Hmm, some doggy looks very muddy in those pictures. Glad he managed to turn back to normal! Hehehe!

Looking good Sam! How was the agility trial?