I apologize profusely for not posting recently, but I am on the "lam," shall we say. My internet connection has been intermittent on my travels as of late.

After some R&R with my Texan friends, I felt I should get moving on to the Stain Mecca. They all said, "dude, you are close to Mexico. Go down there and lay low until your mom forgets about all your stains. I hopped in the VW, and off I went. I wasn't really reading the signs well, and even though I thought I was in Mexico, it was actually NEW Mexico. Then, I read the sign that said Welcome to New Mexico, Land of Enchantment. Well, last time I was "enchanted" I was at that tea cup agility trial and everyone (but me) was totally daft. I immediately tried to find my way out of that place.

In rummaging through the VW's glove box, I found a map that was recommended to me by Tanner, Joe Stains little brother. What was I thinking. I am not a whiz at Geography, I have realized. Everyone was saying I should go south to to Mexico to see Lorenza. I thought that was a splendid idea. However, on looking at Tanner's map, Mexico was not listed, and instead there was Hawaii.

I realized too late that Tanner's map was inaccurate. I ended up in rush hour at the bottom of the sea. 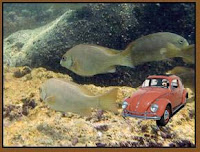 While I was in the traffic jam, I received an urgent Pee Mail from Katherine who immediately told me that I could NOT be at the bottom of the sea, since Hawaii is NOT to the south of the United States. I told her, well.. how come I have a photo of ME on the beach in Hawaii? I had just finished a delightful Pawhomma Pawma, and I am savoring the last bit on my nose! Stupid Toller. 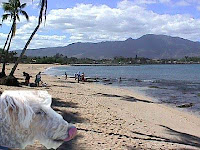 Then, Zorra pee-mailed me a more ACCURATE map, and I realized that I was NOT in Mexico. So, I packed up the VW, and went back the way I came and finally ended up going the correct direction and arrived unscathed in Mexico.

After a while, I found Lorenza, and here is her photo when I told her about how I arrived at her house via Hawaii. 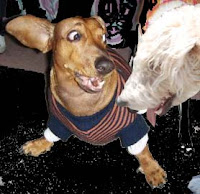 I am having a great time in Mexico with Lorenza. She is a very kind hostess and is showing me all the sites. Maybe we will come across the Stain Mecca. I am not sure I am so close to it now. However, I do think it is some place warm.
Barked by COL. Sam ASTA-fari Joe H. Pinkerton Peabody, Esq at 9:17 PM

Wow, your trip sure looks exciting!! Especially being underwater! We don't really like water, what's it like down there?
Have a great day and hope you reach the stain mecca soon!
Wags and licks,
Maya and Kena

We are glad you finally found Lorenza we know she'll take great care of you!

You look like you're having a great time at Lorenza's place! Hey, when are you gonna come to our place? It's warm here & so you might like the weather.

Hey pal, oooh, you're very lucky to meet up with Lorenza! I'm sure she'll look after you! How long is your trip going to take? J x

We knew when you finally found Lorenza she would be a great hostess. We jus scratching ourselves fur not going with you cos it looks soooooo fun

Lorenza looks quite surprised at hearing your story. Glad you are safe and sound visiting her and that your little trip to the bottom of the ocean didn't hurt you any.

After being with Lorenza you may not want to come home!! Love A+A

Oh goodness gracious Tanner giving directions?! You are lucky you didn't end up in Guam or Antarctica!! We think you better buy one of those GPS devices???

I've been enjoying your visit a lot! And sure I don't want you to go!
Kisses and hugs
Lorenza

WOW, what a trip, I can't wait to hear more.

Have fun with Lorenza

Hi Sam,
How good you found Lorenza! She is very cool and certainly will take care of you well! Have fun!